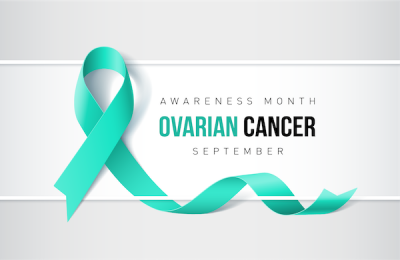 Ovarian cancer encompasses cancers of the ovaries, fallopian tubes, and the primary peritoneum, which is the tissue that lines the abdominal wall and covers the abdominal organs. Taken together, this group is the fifth leading cause of cancer death in women in the United States.

These cancers often go undetected until they’ve reached advanced stages. They may not cause early signs or symptoms, and it is difficult to screen for the disease, according to the National Cancer Institute.

But because it often goes untreated until the disease has advanced, the survival rate is low, with a five-year relative survival rate of 49.7 percent.

There are three types of ovarian cancer in adults. Ovarian epithelial cancer begins in the tissue covering the ovary, lining the fallopian tube, or the peritoneum. Ovarian germ cell tumors start in the egg or germ cells. Ovarian low malignant potential tumors begin in the tissue covering the ovary, and are characterized by abnormal cells that may become cancer, but usually do not.

Risk factors for developing ovarian cancer include family history and the presence of inherited gene mutations. There are tests that can detect mutations in the BRCA1 and BRCA2 genes, which increase the risk of female breast and ovarian cancers and some additional types of cancer. Other risk factors include the use of estrogen-only hormone replacement therapy and the use of fertility drugs.